Bitcoin’s halving was accompanied by high levels of volatility as many prominent analysts within the industry expected. The flagship cryptocurrency took a 20% nosedive over the weekend that saw its price drop below $8,000. Then, it quickly rebounded and it is now consolidating around the $8,800 level.

The Effects of the Halving

Although everything seems normal like nothing happened, Charles Edwards, digital asset manager at Capriole Investments, explained the recent supply shock that Bitcoin went through is the “most brutal” in its short history.

The analyst believes that miners could soon capitulate since their production costs just doubled to $14,000. As unprofitable miners exit the network, the selling pressure behind BTC may rise exponentially increasing the odds for further retracement.

“In the last halving, price was just 10 percent below production cost, and price and hash rate collapsed by 20%. Without FOMO now, expect a big miner capitulation of more than 30%,” said Edwards.

While there might be a significant number of miners shutting down their operations, a renowned analyst within the crypto community maintains that Bitcoin’s uptrend remains intact.

A prominent crypto aficionado affirmed in a recent tweet that the pioneer cryptocurrency is “not done yet.” BTC is currently sitting on top of an ascending trendline that is showing strong support.

Given the strength of this barrier and the increasing volume, Bitcoin could be far from a further decline, according to the chartist. 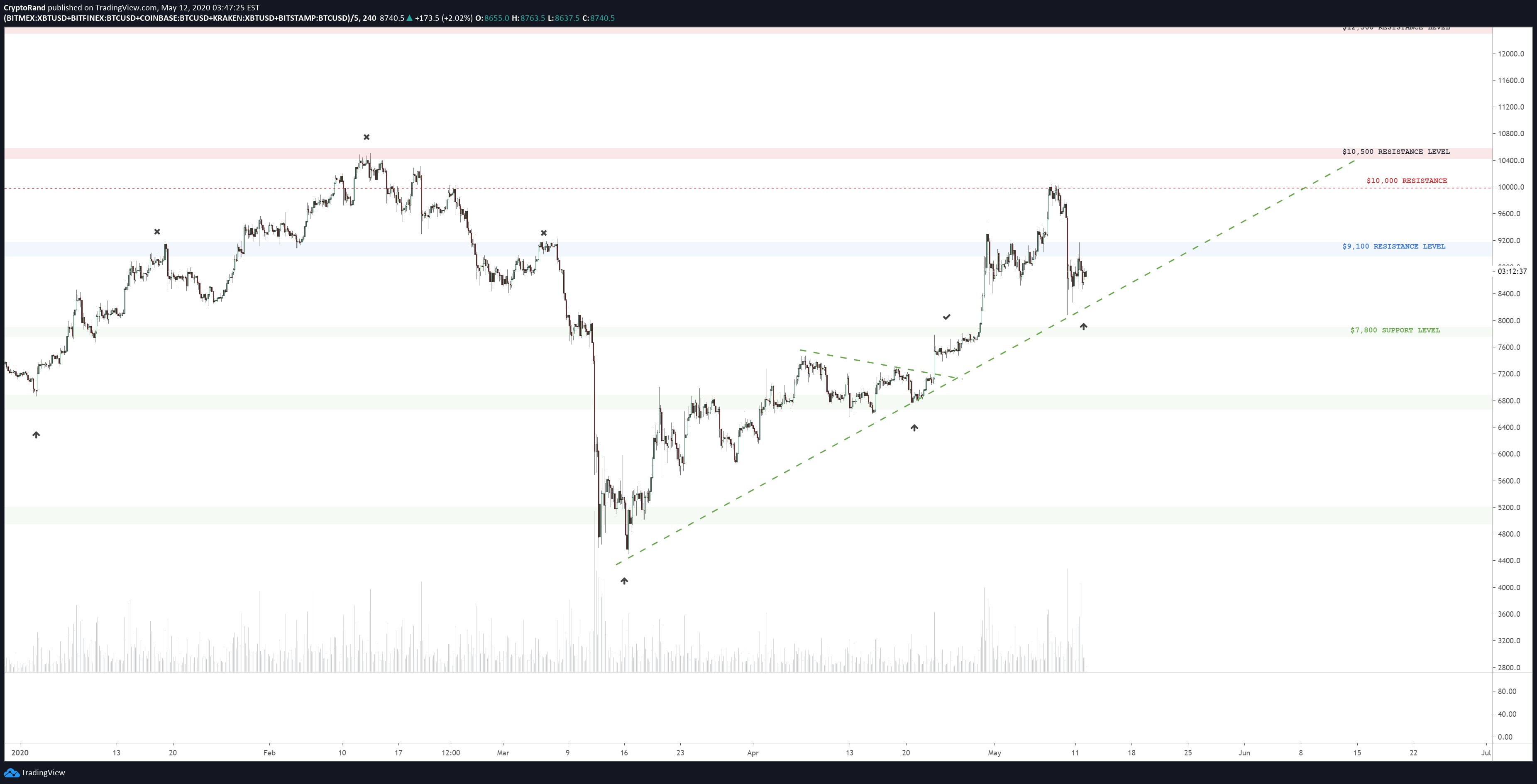 Indeed, the bellwether cryptocurrency appears to be contained within an ascending parallel channel since March’s Black Thursday.

Since then, each time Bitcoin rises to the upper boundary of the channel, it drops down to hit the lower boundary, and from this point, it bounces back up again. This is consistent with the characteristics of a channel.

If the parallel channel continues to hold, Bitcoin could bounce back to the upper boundary. Although full-blown rebound may take some days to take place, it is extremely possible as it has happened over the past three months.

Bitcoin Is Contained Within an Ascending Parallel Channel. (Source: TradingView)

Based on the Fibonacci retracement indicator, closing above the middle line of the parallel channel at $10,000 could propel Bitcoin towards a new yearly high around $11,000.

The 38.2% Fib Level Is Key To Bitcoin’s Uptrend. (Source: TradingView)

On the flip side, it is very important to pay close attention to the support given by the 23.6% and 38.2% Fibonacci retracement level. A sudden bearish impulse that takes Bitcoin below these areas of support could jeopardize the bullish outlook.

Under such circumstances, BTC could fall to the next support levels that are represented by the 50% and 61.8% Fibonacci retracement level. These demand walls sit at $6,850 and $6,100.

Only time will tell whether support or resistance breaks first, which will be key to determine where Bitcoin is headed next.